Just when you imagined that the capacity of our Wounded Leaders for self-deception had been exhausted, David Cameron issues his pronouncement on Afghanistan:  “Mission Accomplished.” What is going on?

Has the man any sense of history? Does he not know that white hyper-rational culture has failed to tame these Afghans for two centuries? Only George MacDonald Fraser’s Flashman managed it, and he was but a fictional figment of public-school imagination. 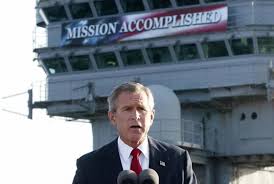 Speaking of which, can’t DC even remember a previous “Mission Accomplished” moment ten years back? George Bush, on the deck of the mighty USS Abraham Lincoln aircraft carrier, announced it just before the Iraq trouble really got going? Have I missed something, or wasn’t it Tony Blair’s hunger to sit at High Table with headmaster Bush that led Britain into that war, famous for its fictional WMD’s?

Besides, how can we realistically force Afghanistan to adopt a parliamentary democracy when most of the country is made up of rock, dried mud and ethnic rivalries that we have no idea of? Some of their social customs may revolt us, such as their patriarchal attitudes to women. But some of them, rooted in indigenous culture, surpass our own.

I well remember an evening at the start of Ramadan in 1971. I had just crossed from Iran to Herat in the back of a battered pick-up. In the restaurant of the basic hotel where I was staying a string band was playing to a packed audience, who passed slips of paper containing couplets they themselves had composed to the singer. These were then sung out to the public, who replied with degrees of appreciation according to the poet’s merit. Even though I had no Farsi, I was stunned. To me, that was culture.

A year after Afghanistan had been flattened as a payback for 9/11, Donald Rumsfeldt declared it “A start-up country.”

Come on, DC, check out some history! I suggest “Mission Impossible” might be more appropriate.

But then we would have to feel the pain of it, and feeling the pain is something Wounded Leaders just won’t do.