The last two years have seen an unprecedented increase in the interest in the psychological problems of boarding. My own psychohistory Wounded Leaders generated several commissioned articles, including two in The Guardian. In May 2015, Confer hosted their first conference on these issues, ‘The Establishment on the Couch’, featuring both Joy and Nick. An actor-read version of Nick’s original 2000 book, The Making of Them, will shortly be available as an audio-book for download.

Amazingly, Professor Joy Schaverien’s book Boarding School Syndrome became Routledge UK’s best-selling title of last year. This leading academic publisher is now bringing out the first manual for therapists on the subject: Trauma, Abandonment and Privilege: a guide to therapeutic work with boarding school survivors, by myself and Thurstine Basset. So we are delighted that finally the problems are getting recognised by academia. 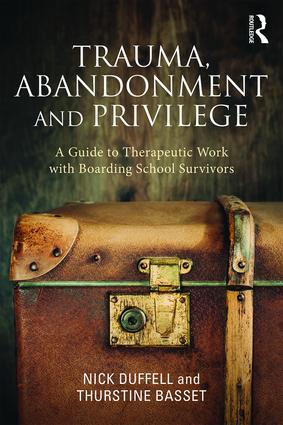 As Boarding School Syndrome and the Strategic Survival Personality become increasingly recognised by GPs and others as problematic and specific psychological phenomena with a widespread prevalence in Britain, demand for information on how to work with these issues is growing very fast now.

A parallel increase in enquiries to the Boarding School Survivors’ website means that we are have trained up five more teaching staff and are now running three 4-day public workshops a year. All these now have waiting lists and we still have more referrals for individual therapy from informed and experienced practitioners than we can fulfil.

To coincide with the publication of Trauma, Abandonment and Privilege we are pleased to announce our second Diploma Training in Specialist Psychotherapy with Ex-boarders at post-graduate level – the first was run in 2006 – and we are calling this training ‘The Un-Making of Them’. Full details of this initiative can be read and downloaded here.

Why should therapists be busy ‘un-making’ adults who have had what is commonly known as ‘the finest education money can buy’ often said to be ‘the making of them?’

In Britain, boarding school became the favourite, rarely questioned, almost required destiny for the children of the middle and upper classes, starting usually well before puberty. Under the prevailing 18th and 19th century attitudes to children, boarders were subjected to a process of being ‘made’ into the right stuff: rational, successful, aspirational and confident of their superior place in the world. Vulnerability, emotions, softness, sexuality, dependence had no place under this scheme and had to be disowned. These attitudes have proved surprisingly durable to the present day. They appear to have conditioned our nation’s social structure and subverted our politics.

Until very recently the effects of boarding education on children have been largely ignored. Despite frequent references in English popular literature to the agonies experienced by children at boarding schools and to the repressed and secretive adults they can become, the problem went almost entirely unnoticed by the medical and psychological professions. There are several reasons for this. In Britain, boarding education carries high social status, and is therefore considered a privilege worthy of the considerable financial investment parents make. The interested parties, therefore, have been unlikely to question this social investment, while the children, laden with expectations, put on their ‘brave faces’. Problems tend therefore to resurface only in later life.

Ex-boarders have been well trained to put away all vulnerability and empathy in favour of functioning, showing the world only their well-built façade, their Strategic Survival Personality. In consequence, the severe difficulties they have in intimate relationships or with workaholism, for example – which ought to be expected following attachment-deficient institutionalisation – can get discounted or be difficult to pin-point, let alone heal. Besides, most ex-boarders suffer from a malady that they themselves have not identified with.

While some commentators propose that only ‘some children are damaged by boarding’, our experience over 25 years at Boarding School Survivors suggests that all children have to survive the rupture of attachments and institutionalisation, and that this cannot be achieved without a cost.

The problems for ex-boarders are only beginning to be properly recognised, and many therapists struggle to detect the presence of boarding issues in their caseload. Moreover, the combination of learned functioning and privileged abandonment makes boarding school survivors extremely challenging clients to work with.

Working therapeutically with boarding school survivors is particularly challenging for many reasons, but chiefly because it involves helping the clients to live without the learned defences of a lifetime, to take down the Strategic Survival Personality that has been the best friend and protector. This is what we mean by ‘the un-making of them’.

We appreciate all of you for helping to spread the word!