The price of being born into a rich family 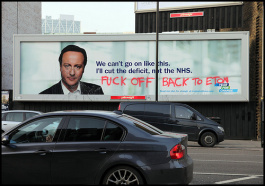 “Does being born into a rich family benefit you?” asks Andrew Sayer.

“Clearly it does,” he continues. “You inherit not merely money but ‘social capital’ – lots of connections in high places that will benefit you relative to others who lack them.”

He’s right – look at good ol’ DC! Of course, if you were born into such a family Britain you will most likely also have gone to boarding school, where despair is utterly taboo.

If those who think I am exaggerating the plight of the privilege, try another source – the Establishment itself.

Charlie Waller was successful and popular pupil at a famous upbeat boys’ boarding school south of Oxford. According to the Times Educational Supplement, his school says that Charlie “epitomised the Radley spirit, a model pupil, loyal, kind, funny and popular, with a strong sense of justice and fair play as well as being a towering physical presence as head of house and captain of the rugby first XV.”

But one September – that back-to-school month that was the backdrop to the Plebgate saga (see my archive) –  all was not quite what it seemed.  At the age of 28 Charlie drove to a wood and killed himself by inhaling exhaust fumes piped into his car.

We have no way of knowing what was going on in his mind, and such tragic events are invariably a combination of many things. But one thing is certain: you are not allowed to be depressed, sad, and certainly not in despair at boarding school; it is not good for business and they have ways to prevent it.

In consequence, many of us ex-boarders spend our lives keeping busy to keep feelings at bay. It works – up to a point.

In fact, in an awful irony, while I was queuing for my EasyJet, reading this story, I ended up in conversation with a young woman ex-boarder who told me that her (ex-boarder) husband had recently and inexplicably hung himself in a wood, leaving her alone in a farm in the middle of nowhere with a three year-old.

It’s enough to make you angry if it wasn’t so sad.

There is now a Charlie Waller Fund  to help de-stigmatise mental illness. Some of you might be thinking that it is high time we also had a  fund to help stigmatise early boarding.

Oh, I nearly forgot to mention it, just like George Monbiot did in his excellent new video, there is one recently started up: it’s called Boarding School Action.