The nation that gave us all that wonderful music, all that incredible literature, all those brilliant inventions, also gave us the Columbine legacy, which is playing out yet again, this time in Parkland, Florida. 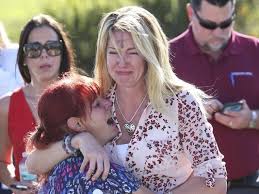 Even that purveyor of bias, Fox News, laments that there have been 25 school shootings in the U.S. since the Columbine massacre in 1999 and 54 mass shootings since the turn of the century.

This is such a tragedy, and even the one closest to me at the moment, the knife murders amongst London teenagers, is dwarfed by this grievous madness, that makes me want to howl.

What is going on in America? How should we think about it? What is it?

Well, it’s easiest to say what it’s not: It isn’t immigrants; it isn’t Jihadists. It isn’t the simply the bonkers gun laws or the monstrous NRA, still projecting the insane idea that Americans need a militia in case Mad King George III wakes up and comes back to get them all. These unfortunately are just symptoms.

And it isn’t – I am afraid to say – mental health problems, although the perpetrators were undoubtedly mad at the time of committing the crimes. It is about madness, though, I suggest. We have to, I venture, not only think psychologically but systemically about these things.

And here it gets even worse. The US has had some of the best systemic thinkers in the world and no-one seems to be invoking their spirit. I am thinking of Milton Erikson, Harold Searles, Murray Bowen, Virginia Satir, Jay Hayley and Karl Whittaker. These people (and not only they) understood that the individual regularly carries the symptom for the group, and that if and only if only  the group takes it back, can they get freed.

Acts like this suggest to me that the system has a message to the world which is not being paid attention to. In order to pay heed to messages coming from the ‘unconscious’ of a nation you need a psychohistorical approach. What does that mean? Well here is how I define it on my website:

So how does psychohistory actually work? Again from the website:

Through such a lens one thing is very striking to me: the repeated murder of innocents. Twenty-five years ago, I wrote my first ever psychohistorical essay on the murder of baby James Bulger. I may dig it up again and republish it.

Then, I wondered if the message hidden in the tragedy was what we are as a society are doing to our innocence. In the US case of school shooting, I suspect there is something similar, but more historical that wants to speak its voice.

As US power is on the wain it must be time for some honest reflection. The USA was founded by narrow-minded Puritans; its wealth was largely created by the brutality of slavery; the domination of the land was established by genocide, which includes breaking every treaty ever made to the indigenous people. Take a trip to one off the reservations and get a whiff of the projected worthlessness into these once-dignified people: it’s very easy to feel.

Australia and Canada have made some small beginnings in acknowledging their brutal and violent pasts. America has not, while Britain is in danger of re-glorifying its colonial past. National grieving and monuments to arrogant folly need to be created in both countries.

In America, it is clear that this process cannot be delayed any longer and cannot be fixed through the false myth of individualism.