Does the world need more consciousness?

For the last 2 years, I’ve been working with political activist and entrepreneur on a new book ‘The SIMPOL Solution‘ to take a look at the state of global problems through a depth-psychology lens.

We launch the book in February, forthcoming from Peter Owen in 2017, but just before the US elections Alex Lyons interviewed me to get my perspective on everything from Trump and Theresa May, to the power and potential of psychology to get us some clarity in these uncertain times. 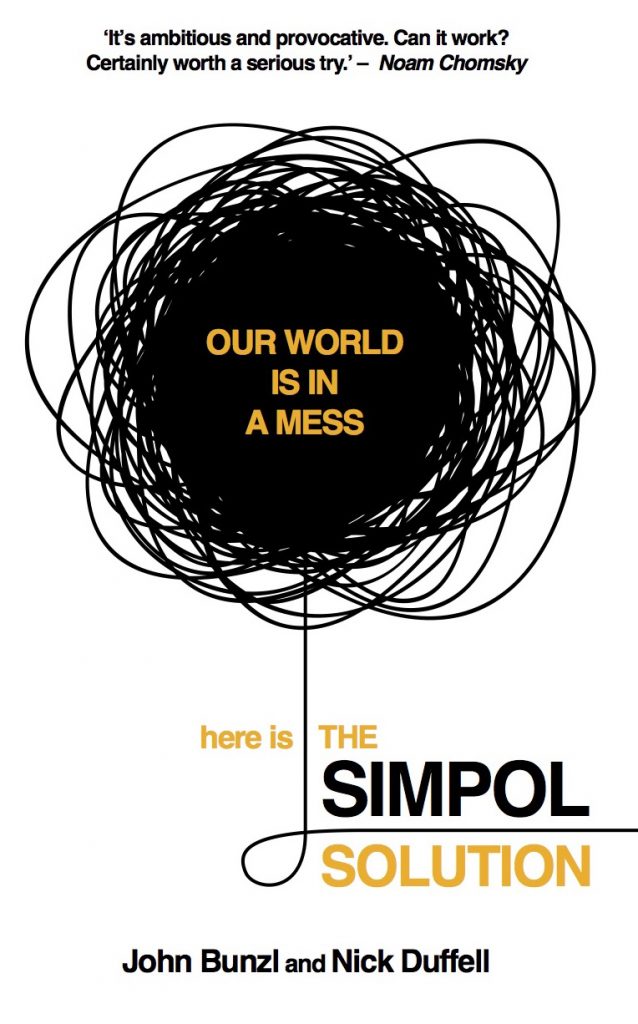 Alex Lyons: What did you know about Simpol before you started working on the book?

Nick Duffell: I knew about Simpol through my wife, Helena, about 10 years ago or more, and liked the idea, but I wasn’t quite ready to see it in the light I do now.

AL: And how did you feel about it?

ND: Well, despite its good idea I felt it wasn’t presented very appealingly then – wasn’t ‘sexy’ enough – and I still wasn’t ready to come out of the consulting room with my own psycho-political/ psycho-historical stuff so I mostly thought it worthy and amongst other good ideas.

AL: Has your understanding of Simpol changed during the writing process? If so, in what ways?

ND: Yes, of course. I have really taken on the beauty, simplicity and comprehensiveness of the model by working alongside John. I particularly like the fact that Simpol is workable through existing institutions, so although, temperamentally, I’d like to see the system completely changed and redesigned from scratch, I know that isn’t going to happen – except for catastrophe, in which case history shows us that it is usually the will of the strong that prevails in such times.

AL: Have your feelings changed?

ND: I think that now I have understood it better, and the world situation has got so much worse, and now that we have been able apply depth psychology to it it has become a much richer and mature beast for me.

AL: Has your understanding of the world changed? If so, how?

ND: Well, the most important event was personal – becoming a grandfather. I felt in my body how more important to me the future had become. Then through the work with John, one important detail arising is that I don’t see it as hopeless to try to get the world to become more conscious, because I realize that it only takes a minority to bring in new ideas, as long as they are honest, vocal, relational and active, so I feel a bit more hopeful, paradoxically.

AL: Why and where do you see psychology as being most relevant to politics today?

ND: I think it is the missing force – the most powerful knowledge we have – but not involved in politics, which is all psychology, really! The late Jungian analyst and scholar James Hillman wrote a book called We’ve had a Hundred years of Psychotherapy and the World is getting worse. After the European Enlightenment, different disciplines began to specialise and stopped talking to each other. Psychology only has itself to blame for remaining an outsider discipline: it fragmented like the Church, with endless schisms and sects, failing to evolve a common body of understanding that could be universally drawn upon. If it had, and if psychology and politics were more in dialogue with each other, commentators would be better able to see through the politics of fear, blame, and scapegoating that arise at times of transition in society when people feel helpless and hopeless. All cutting edge creative work today that I have seen is now bringing different disciplines back into dialogue. Actually, the leader in this field has been neuroscience.

AL: Why is it so important to discuss globalisation at the level of feeling?

ND: Because for whole swathes of people – in principle, those who are losing out under globalisation – it doesn’t feel good: their work disappears elsewhere, their neighbourhoods change, and they want to go back to how things were. Actually, they no longer feel safe and their identity is threatened, even if they can’t articulate it because that’s a meta-view. Being able to talk about how you are feeling requires safety and self-awareness. And they feel impotent, so now they either become politically apathetic or get angry. They need to find a culprit so they protest by scapegoating, and the ‘red-tops’ stoke the fires. It could be all politicians, foreigners, the corporations, or Brussels, or, as in the Thirties, the Jews. It feels good to blame but it’s a regressive move, because just as consciousness can go up a level, it very easily goes down in the absence of safety.

AL: How do you see the contribution of psychology that you bring to this new book, The Simpol Solution?

ND: Well, unless we integrate the kind of analysis I have just made, for example, everything remains at the level of theory. The vital issue is to understand the connections between identity, emotions and consciousness, especially when we are inviting readers and participants in this huge exercise of changing our world to expand their identities (which is perfectly possible) and begin to think world-centrically in order to get a new perspective. This will inevitably provoke some resistances, which we explain in the book and take people through, in what we hope is a gentle way.

In particular, we try to appeal to those who are already engaged politically within this ‘for-and-against’ polarisation of political views, which powerfully affect identity and therefore thinking styles, and tend towards blame rather than creative thinking. This ‘us-and-them’ mentality is very common but functionally very static. The tendency to define one’s self as against something is very attractive and hard to drop: it’s part of what we call the ‘post-modernist trap’. And here understanding of the deepest emotions comes in. One of the ways out, that we recommend, is that we have to embrace a state of grief before we can really move on: to grieve that our cherished national sovereignty has had its day, to grieve the loss of comfortably having someone to blame.

AL: Someone once said “Citizens get the politicians they deserve” which, given politicians are generally held in such low regard by citizens, suggests that citizens themselves could perhaps benefit from some ‘political psychotherapy’. Is that what you see the book offering?

ND: Well yes, I guess. But for me, this hides a much more important question: does our responsibility as citizens end after voting or is there more to democracy than that? I recently attended a workshop for ‘thought leaders’ run by two MPs of the new Danish political party Alternativet, and over these days we realised that actually citizens have to be prepared to train their politicians and supervise them. To me, as a psychotherapist, that is normal practice. So we need to get on with that rather than just blaming them, and we need value our votes. But we also need to train journalists and political commentators, because they are the bridge between citizens and politicians and are enormously influential at elections. For example, during the 2010 UK election campaign, Gordon Brown was regularly blamed for the financial crash of 2008; and because TV anchor people were so wedded to the idea of balance they refused to dismiss this as an impossible untruth, and many of the public began to believe it.

AL: What kind of leadership is needed to make the world a better place? How can we cultivate it?

ND: Conscious leadership; that means self-aware and aware of the different levels of consciousness in the electorate, able to relate and persuade other leaders by example and persuasion, busy with the future with long-term goals.

AL: If you could convince just one person in the world to read the book, who would it be, and why?

ND: It has to be the next US president!

AL: If readers could take just one thing from the book, what would you want that to be?

ND: That beginning to think world-centrically makes everything fall into place and gives a real purpose for using their votes

AL: Is the world doomed, or is there still time to save it?

ND: The world will survive but humanity has still a bit of evolving to do – and every bit helps.

AL: Should we give up on party politics?

ND: If we could turn away from parties to policies that would be wonderful, but unlikely.

ND: I can’t imagine Trump can prevail. Right now he looks like he doesn’t even want the job.

AL: Will Theresa May make a good Prime Minister?

ND: She is a perfect choice to quell the panic in Tory ranks, but so far her actions seem dangerously regressive. Her team is weak, and Brexit is unlikely to turn out well.