This morning I watched the whole of the Remembrance Sunday broadcast, which of course was preformed with dignity and pride by all taking part. Yet still I am left with several heavy questions, for which I need help.

Most superficially, I wonder why we cannot make our ritual on the real anniversary of the Armistice, as the French do, and why it has to be a Sunday? It seems like an old throw-back to when we were trying to chase the saints out the country along with Catholicism by means of the Puritan’s Sunday. Would it be so wrong to have a public holiday – especially this year, a century after the Great War started?

Secondly, I have been gripped with strange, grim feelings about the Great War all my life, and my father read everything there was to be read about it, even though his own father stayed at home procuring trench props for Flanders. So I always get moved by the celebrations that we do have, but I still wonder, how, in the midst of all the military formalities, do we make room for sufficient grief about the wound to our culture, so that somehow the souls of these dead have some rest and don’t seem to continuously haunt us? The sea of artificial poppies one for every fallen Brit round the Tower of London was a shock to the heart, and beautiful. But why don’t we have a mass grief ritual, as at the time Princess Di was killed, for all the people to engage in?

This grief can be engaged with. The BBC has made many excellent offerings about the First World War this year, but none I have seen came close to really meeting the grief in a real way as Huddersfield poet Simon Armitage’s The Great War – An Elegy: A Culture Show Special.
Armitage’s poems were both serious, empathic and provocative; his interviews with relatives of participants were honest, dignified and transparent. His account of Amy Beechey was heart-rending. This Lincolnshire woman had eight sons who went off to fight in different campaigns, and only three came home.

This is my way in to the big question I have harboured for many years and really need help with: what should we say, from our hearts, to these brave and grief-torn mothers who believe that their sons died to protect our country?

What to do, when we know in our minds that the Great War, and more recently the Invasion of Iraq, were fought because of the manipulative stupidity our Wounded Leaders, and need never have taken place?

When a million protesters showed their disapproval on the streets of London and no notice was taken of them, and evidence was falsified, and no WMD were ever found, can we look dead soldiers’ mothers in the eyes? And how did Blair feel at the ceremony with his new Saudi job – or does he feel nothing?

When the Great War, as all my recent research tells me (despite the BBC’s persistent failure to mention it), was more that anything a stitch-up by the great powers – Britain, Germany, France , Austria and Russia – to prevent International Socialism from really talking root, so the working classes were sold a bogus nationalistic conflict to divert them and lead them in their millions to the slaughter, can we in any way disillusion these mothers?

So, then do we need to go on hiding the truth? What do others think?

Here’s the last one. Watching the Queen start the wreath-laying at the cenotaph 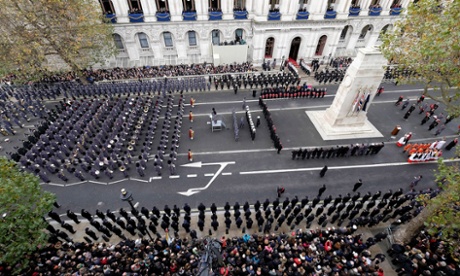 , in the fashion which lays out the nations top-down hierarchy so clearly, I always wonder how long Britain can keep one awful structural mistake going. It is not that I am particularly republican – I do think there might be a place for the Royals to embody some kind of hierarchy of value – but how can a head of state also be the head of the church when she is also head of the armed forces? Isn’t this exactly the structural situation of the Caliphate which we have deemed inappropriate for our times?

One reason I know for certain that this is wrong is that it was expressly forbidden in the Native American philosophy of governance, which is for a large part responsive for the good things in the American constitution. The First Americans used what they called a ‘Circle of Law’. This meant that in council the various chiefs had a protocol for how they did business. War and Religion could not occupy one place nor talk directly to each other, because doing so would mean crossing the Children’s Fire – a violation of sacred law.

Could this structural problem at the heart of our nation be one reason why we seem to get all the real priorities wrong on this island, like not wanting children at home? Dose not the unending tally of abused children show that our Children’s Fire has been violated?